Newsletter #5 – Who is Help to Buy Helping?

In “Economics 101”, there’s a general sense that demand and supply have an ebb and flow to them. The general understanding is that if demand is high and supply is low, prices rise. But this price rise, in turn, encourages more suppliers to come meet that demand.

What this simple model fails to account for, however, is how dramatic differences in outcome are depending on how flexible the supply is.

When supply is flexible, increasing demand can result in an increase in supply. So if a government has a policy goal of increasing supply, they can take steps to increase demand. They can place big advanced orders for solar panels, for example, so that producers have the confidence to ramp up production. Or they can provide subsidies to households to buy them, again with much the same effect.

When supply is in-flexible, however, increasing demand just makes everything worse. Direct purchases, as we discussed two weeks ago, just reduce private supply. Governments often give subsidies, or worse, give or guarantee loans for things with in-flexible supply. In the US, for example, top-tier college places are limited (almost by definition, if exclusive status is part of what they sell), but the Government provides loans to prospective students, and prices have spiralled. Letting people get into debt to compete with each other, or giving subsidies, when supply is in-flexible, usually translates into price increases roughly equal to the loan-limits or subsidies.

To try counteract this phenomenon in the housing market (which has very in-flexible supply right now), the European Central Bank makes it harder for buyers to compete with each other by going deeper into debt, with lending limits and minimum deposit requirements.

In 2016 the Irish Government introduced a Help-to-Buy scheme, which sought to skirt the deposit requirements for some first time buyers by having the Government pay half of it. Despite criticisms you might expect based on the logic above, they expanded the scheme to cover (up to) the entire deposit in 2020.

The Parliamentary Budget Office has just published an analysis of the scheme, finding that it caused house prices to rise (a small amount), cost 43% more than planned and mostly subsidised expensive houses, where a third of recipients didn’t even need the cash to meet the 10% deposit, but got it anyway.

Will it be renewed in the upcoming budget? Expanded is my guess.

Selling AIB | The Irish State emerged from the global financial crisis owning much of the country’s retail banking system, after having to rescue it. I had hoped someone would come up with proposals to do something fun or interesting with even one of the banks, like an infrastructure bank or a strategic investment bank tied to an ambitious industrial policy. Alas, since no such plans materialised, I guess the second best option is to sell the bank and use the cash where we do have ambitious plans.

After a pause during COVID, the department of finance has resumed selling our two thirds ownership of AIB, with the minister explaining that “the Irish Government believes that banking is an activity that should be provided by the private sector and that taxpayer funds which were used to rescue the banks should be recovered and used for more productive purposes.”

Peak Employment | Under the category of good news phrased as bad news, “Economist Kieran McQuinn of the ESRI has warned that the national unemployment rate will fall to 4% next year, fuelling sharp wage increases.”

Team Transitory  | Some good signs on inflation which would indicate that major supply constraints are getting resolved. Rates for shipping containers are falling (but still a long way off pre-pandemic levels) as are some commodity prices. Could be a blip though, still too early to spot a trend.

Whiplash | If you feel like we’re living in bizarre economic times, the Bank of International Settlements’ Annual Economic Report might help you understand why (or at least confirm that your feelings are accurate). Adam Tooze writes:

“In the last 18 months we have seen the fastest global growth in 50 years, followed by the most rapid slowdown, creating what is in the BIS’s view, a global economic configuration unprecedented in history.

Specifically, we have never seen such a combination of already rapid inflation and rapidly slowing growth with elevated financial vulnerabilities, notably high indebtedness against a backdrop of surging house prices.

The BIS remarks that “(t)he absence of historical parallels makes for a highly uncertain outlook”.

In the current conjuncture, if you aren’t puzzled you don’t get it. This isn’t your common or garden slowdown. Admitting to disorientation is a sign of honesty and realism.”

Childcare Costs | The economist published this chart showing the amount an average couple spends on childcare, as a percentage of their disposable income. Look at Germany! The last numbers I saw on this in Ireland (in 2019) put us at 29% for a couple and 42% for a single parent. 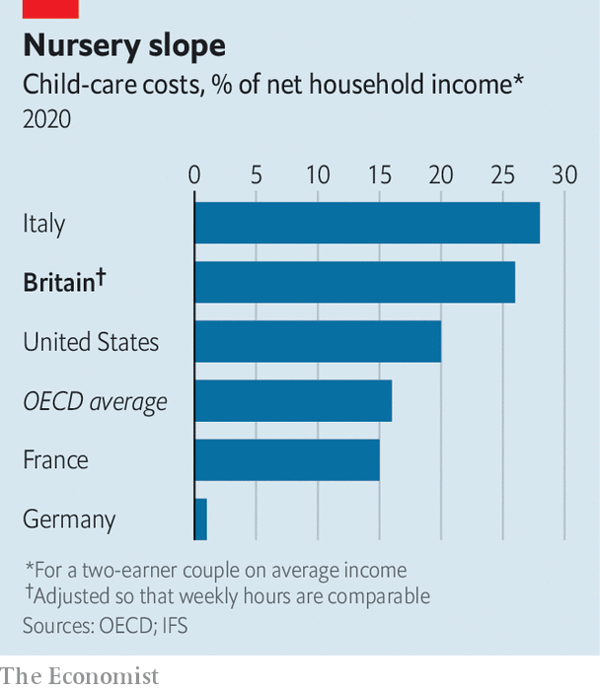 They also share this tidbit – “Compared with other countries, Britain has a relatively high share of mothers in part-time work. One recent study estimated the gains from shuffling men and women according to aptitude, pulling productive women into work and kicking unproductive men out. Astonishingly, it calculated that Britain’s average output per worker could be as much as 30% higher.