Central Banks are Doing the Right Thing for the Wrong Reasons

Imagine you’re planning to start a new small business. You’re going to open a gym to serve your local town. Before you can start charging clients, you’ll need to get a premises, to paint it and fit it out with equipment and then fill it with trained staff.

Eventually you plan to pay the staff and the landlord with the money you make from membership fees, but you won’t have many members while you’re just starting out, so you need to find other ways to bridge the gap between starting-up and breaking even.

With all new business, some of this happens through sheer force of will – convincing a landlord to give you a space for a few months for free, or for people to volunteer their time and energy to the cause. But it’s rare for this to bring you all the way to breakeven.

For most new businesses they get some sort of “credit” to bridge the gap – an overdraft or a term loan or investment.

A good model for thinking about the role this credit plays is that it helps new businesses pull resources from their existing employment and put them to new use.

You might use your credit to outbid other tenants looking to put the premises to different use, like a bakery or a café. You’ll pay wages to convince people to switch from being a barista, or an accountant or a self-employed personal trainer to becoming a trainer in your gym.

The big unknown here, for both you and the bank, is how likely your gym is to succeed? Will you use the money to assemble people, property and equipment in a productive way that earns you money and pays back the loan?

You care about the absolute answer here – will the business succeed, yes or no? But in some ways you also care about the relative answer – will my gym make MORE productive use of the inputs than a bakery or a cafe – because (in part) the rent and the wages you pay needs to outbid those other businesses, and you can only do that over the long term if you can put them to more productive use.

The same question can be asked at a wider, more macro level too. Is the general level of credit in the economy encouraging more productive uses of our land, time and equipment?

Central Banks try to influence and manage the answer to this question. They think about the availability of credit broadly within an economy, for businesses to start, grow and increase productivity. This is a key role Central Banks play in economic progress and productivity growth.

It’s not that simple, of course. The problem is that not all new or expanding business make *more* productive use of people’s time, our land and available technology. Capitalism is a game of trial and error, much like evolution, where new business models are created and tested and those that make the best use of the factors of production can scale.

While your new gym faces the risk of not getting to break-even, the risk the Central Banks face is that people are put to work in equivalent or less productive businesses and industries. Are they making credit too easily available for chocolate teapot factories and NFT exchanges?

In times of low employment, like we faced after the global financial crisis, that risk was very low. The “current use” of property was vacancy. Diverting people from unemployment to any employment was likely to be a more productive use of their time.

Nobody was worried about the risk of funding too many stupid businesses, because anything was better than nothing. So Central Banks used the tools at their disposal to make credit more freely available. Lots of good businesses were given credit to start and expand, and probably some bad ones too.

This post-recession reality didn’t last forever, and by the time we entered 2022 we found ourselves in the exact opposite situation. Rents are exploding from competition and workers are (almost) all employed. We have staff shortages in almost every sector. Commodities are in short supply and prices are high and climbing.

So this is definitely a time that Central Banks can afford to foster more discernment. If we remain in a low interest rate world, with a higher tolerance for risk and a lower level of discernment, it is more likely that more and more worker hours would be spent in unproductive businesses.

So the central banks are tightening up. They are making credit more restrictive.

You could think of this as a sort of a stress test which less productive businesses will fail. It’s not a very precise test, many productive business who are over-reliant on borrowing or going through a short-term rough patch might also fail too.

In my opinion, this is largely positive. If you believe that too long of a period of loose credit can lead to the creation of jobs that shouldn’t really exist (and I do), then you should want that period to end before the impact from tightening gets too big. The longer it runs, the bigger the eventual job losses will be when it ends.

There is no better time to do this than the present. In most developed countries, unemployment is low and commercial rents are high. Every business I visit can’t find staff. We don’t have enough teachers, nurses, truck drivers… you name it.

So if the European Central Bank is restricting credit to make it harder for a crypto startup to raise a big round of funding, so that some people it might have recruited might instead go an become teachers … I don’t think that’s a bad thing.

The problem, however, is that this isn’t how some Central Bankers are describing why they’re doing this.

Many Central Bankers (but not all) and economic commentators are expressly aiming to *increase unemployment* to reduce aggregate demand. Sometimes with comical lack of self awareness: Here’s Larry Summers, former United States Secretary of the Treasury, saying the US Central Bank (Fed) “recognize that there’s going to need to be increases in unemployment to contain inflation”…. from a sun lounger on a tropical island? 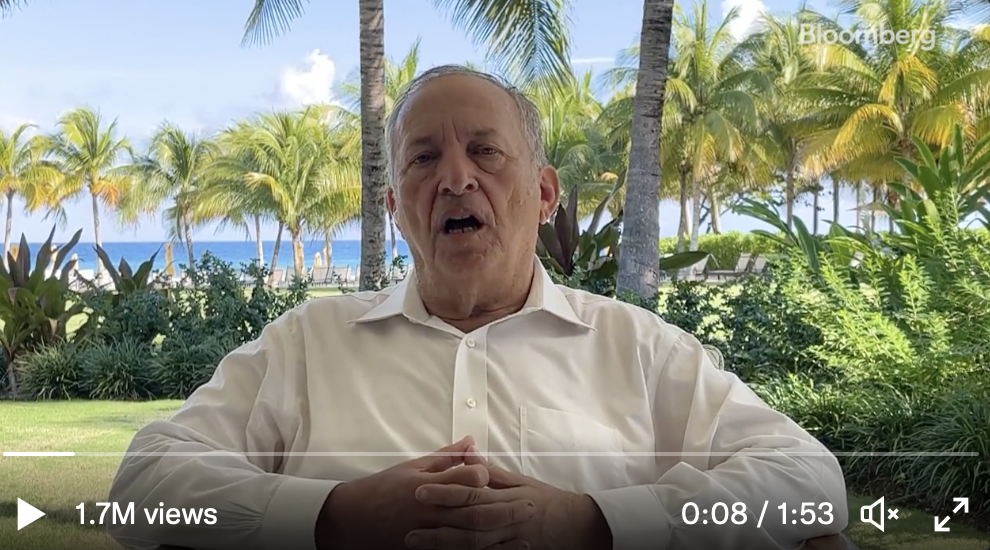 As a civilisation, we’ve still very early into figuring out how to manage economies, so it feels easy to predict that our descendants will consider this approach barbaric in the not-too-distant future. Like the way we look back on the medical practice of blood letting.

This is a more humane approach than trying to reduce the burden on our productive capacity by making a chunk of people unemployed and unable to afford things. It also makes more common sense. Selfishly, we don’t want people idle and twiddling their thumbs all day, we want them to have the opportunity to be active and doing their bit to increase the productive capacity of our shared economy.

Luckily, so far, and despite the intentions of some, that’s what’s happening!